The day I signed up for my first marathon. Two hours before the Boston Marathon was bombed.

I had been waiting for this day ever since I finished my half marathon last June. The minute I crossed that finish line, I knew I wanted to run a full marathon. And after running the Twin Cities 10 Mile last October, I knew that I wanted my first marathon to be the Twin Cities Marathon. Not only is it the "most beautiful urban marathon" in the country, it's a challenging race that draws international competitors and it's an integral part of the culture here in MN. Thousands of locals come out to watch it every year, and I wanted to be one of the people crossing that finish line at the state capitol.

I've known since January that this is the year I would register for and run my first marathon. The only reason I waited to register is because I had to sign up for a Spring half marathon first and didn't want to pay both registration fees at once. But it got to the point where I knew that if I waited any longer, I would lose my nerve and probably not sign up. Today is the day I finally decided to go through with it. Why today? Mainly because I got paid on Friday, but also because I knew that today was the Boston Marathon, and I thought, how fitting that I would sign up for my first marathon on the same day as the most celebrated marathon in the country. A marathon that is a symbol of achievement for distance runners and one that I may (who knows?) get the opportunity to run one day. It couldn't be more perfect.

As I started the registration process, my heart rate sped up. As excited as I am about running a marathon, I am equally terrified. With each blank on the form that I filled out, a new voice of doubt rose to the surface: Name.... What are you THINKING?.... Address..... You're doing this on an impulse.... Phone number.... You haven't thought this through..... T-shirt size.... You don't have the willpower for this.... Emergency contact.... You WILL get injured....

Right before I clicked 'submit,' I prayed that if there is any reason I shouldn't do this event, I would receive a sign. Feeling confident, I submitted the form. When I received my confirmation email, my first thought was: Did I just make a huge mistake (and waste a lot of money)? I told some of my coworkers who are runners (one of whom is also running TCM), and they shared in my excitement. I also shared my news on Facebook, Twitter and Instagram, not realizing how silly and perhaps even inappropriate these posts would seem later today.

For almost a year, I've been wondering what this day would feel like. I couldn't (and still can't) fathom how it will feel to cross the marathon finish line, but I could envision my 'registration day.' The day it all becomes real. The point of no return. Little did I know.

In my excitement, I got back on Twitter to read updates from the Boston Marathon. Everyone was chatting about the winners, the weather and what a perfect day it was in Beantown. Then I saw one tweet that was different from the rest. Runner's World had retweeted a random guy - presumably a spectator - who said there were two explosions by the finish line and that everyone should leave the area. He posted a picture. I opened it and stared in disbelief. Is this a joke? Why is no one saying anything about this? I went back to my Twitter feed for confirmation, but only one other source has posted anything - Reuters. It was a legitimate source, so I retweeted them. 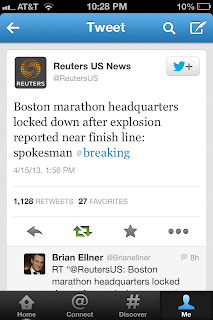 Then, slowly, other tweets started to pour in. I monitored the #bostonmarathon feed and watched them appear - first in groups of 10, then 20, then 60, then 100.... And that's when I realized that this was not only real, it had literally just happened. I texted Collin at 1:56 PM right after I saw that tweet from Reuters. The bombs had exploded nine minutes earlier at 1:45 PM Central. Major news stations didn't start reporting on it until 20 minutes later.

I kept a close watch on Twitter the remainder of the afternoon to stay up to date on what was happening. It was unbelievable. It's still unbelievable. And yet, sadly, a part of me wasn't completely surprised. Why? Because this is the world we live in now. If children can be murdered in cold blood in their classrooms, how can we be shocked that someone would bomb a marathon? But we are. We always are.

Even though my registration was a tiny part of a momentous day that had nothing to do with me, I couldn't help but note the irony. I had registered for my first marathon just two hours before. And I wasn't sure what to make of that. This was NOT what I meant when I prayed for a "sign" not to race. I refuse to even acknowledge that idea. But what I did notice is that my resolve to run the marathon didn't sway even the tiniest bit. Because somehow -- even though I have never run a marathon before in my life, and I've only been running for a year, and I'll probably (read: definitely) never even qualify to run in the Boston Marathon -- I felt like as soon as I had submitted that form, I was one of them. I was a part of the marathon community. I haven't earned my medal; I haven't even started my training. But my heart ached for them. My heart ached for the runners who never got to cross that finish line and accomplish a dream that was likely years in the making. My heart ached for the spectators who stood for hours waiting and cheering for one person that would never show up. My heart ached for the families that got separated and spent several anxious hours wondering if their loved ones were even alive.

In a strange way, what happened in Boston today reaffirmed my commitment to run the marathon. Because I can't control what others do -- I can't change what happened, I can't fix it, and I can't stop it from happening again. But I can control what I do about it. And what I'm going to do is shoot for a ridiculous dream of running 26.2 miles in honor of all of those who weren't able to accomplish their dreams today, or whose dreams were forever cut short. I think this is the message God was sending me in the midst of the chaos. Not that I shouldn't run this race, but that I need to run this race.

Tonight, I was going to go grocery shopping, but I decided to run instead. I went to the gym (because it's still freezing outside here) and watched the footage from Boston on TV while running on the treadmill. As I was finishing my run, the acoustic version of the song "Boston" by Augustana came on my iPod. It was all I could do to hold it together and keep running. For me, it was a sobering moment and a quiet reminder of why we run, in spite of all the obstacles the world throws at us. Because running itself is an act of faith, not just for its difficulty but also for what it represents. I can guarantee that running meant more to those Boston Marathoners than medals and race times. I look forward to stepping out in faith and discovering all that running will mean for me.

"Have I not commanded you? Be strong and courageous. Do not be frightened, and do not be dismayed, for the Lord your God is with you wherever you go." -- Joshua 1:9

"I have said these things to you, that in me you may have peace. In the world you will have tribulation. But take heart; I have overcome the world." -- John 16:33
Posted by Amanda at 11:30 PM